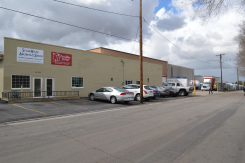 Built on Experience, Grown through Service

When Sugar House Transfer was founded in 1907, it started out with one truck that hauled baggage to and from the Denver Rio Grand Western train depot in Salt Lake City, Utah. James and Norma Greensides later specialized in local and long distance moving and in the 1940s added storage to their services.

In the early 1960s they started offering business records management, and in the late 1980s they added document destruction services. After more than 65 years of successful operation, James and Norma Greensides’ son, David, became President and CEO. Through the years David has carried on the legacy of the Sugar House name. With the large growth of the moving and records storage divisions, David and his brother found it prudent to separate the businesses. In the beginning of 2009 Sugar House Archives & Shred LLC became its own entity, allowing David to focus all of his time on serving record storage customers.

After David became the sole owner of Sugar House Archives & Shred, he continued expanding services in the Salt Lake City area, including diversifying the business, which today includes:

To help with the company’s growing needs, David's three sons, Jon, Jason, and Jeff, became part of the team of professionals, carrying on James and Norma Greensides’ tradition of service excellence.

As a privately owned and managed Utah company, Sugar House Archives & Shred has provided the kind of flexible personalized service that competitors can't match. Today Sugar House Archives & Shred is the largest locally owned and operated document storage and document destruction facility in the state. National and international services are provided through our affiliation with the National Record Centers (NRC).

As the company looks forward to the future and another century of customer-focused service, we seek to explore other opportunities and alliances to serve our valued customers, many of which have become our good friends.

Sugar House Archives & Shred was built on the family values of integrity, honesty, and a sincere effort to do well for others. We would like to have you join us as a part of our extended family, where we place emphasis on the important things in life – including serving you well.